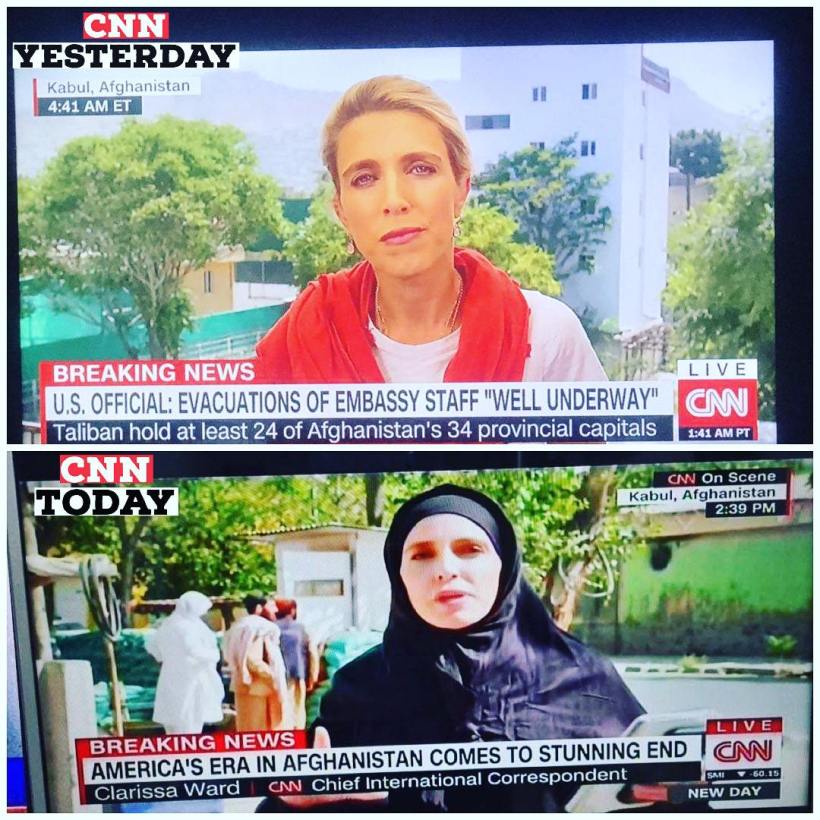 There seems to be no shortage of opinions regarding the US pullout from Afghanistan. The usual pundits are coming out with the usual screeds, the victims and heroes determined by which ideological camp the pundit in question has planted his or her flag. The syllogisms of blame are everywhere you care to look, yet the most important message seems to have escaped notice.

As soon as the Taliban started to consolidate their power and advance towards Kabul, the horror stories of beheadings, floggings, the kidnapping of women and placing them into varieties of sexual slavery, and, most distressing to the American public, the systematic revenge being taking on those Afghans who worked with the American forces. Images of Vietnamese people clinging to the last US helicopters leaving Vietnam were replayed in Kabul’s airport and desperate Afghans tried to cling to US military transport planes while they were taxiing and taking off. A few hundred people were taken inside the planes and transported to Qatar, where talks between US and Taliban diplomats are on-going when this article was penned. Soon enough, the last US plane will depart, the story will gradually fade from the news, and most Americans will forget about Afghanistan. Thousands, unfortunately, will not get out and that understanding is spreading amongst those who will not be treated well by the Taliban. Already, people are posting their goodbyes on freethought and atheist pages on social media. Rather than capitulate and hide who they are, they refuse. They have drank long and deep at the well of freedom and they understand what it means. My hope for them is that their inevitable suffering will be brief.

As egregious and disgusting the above examples are, there is one example which illustrates what happens when any society departs from civilization, a noun which requires no prefix, and becomes a theocracy. Nothing is more telling than examining the status of a woman who has been raped by five men. Civilization, however imperfectly the implementation, without exception views the woman as the victim and her attackers as the guilty parties who should be held accountable and punished according to the laws of the land if convicted in a court of law. The theocracy that now controls Afghanistan has a different take. The men are the victims and the woman is the guilty party. Her punishment? Death by stoning.

As the pandemic rages across America, social media is filled with memes and personal declarations about the ‘right’ to choose to wear a mask when out in public.  Earlier this week, President Trump ordered that hospital data regarding COVID19 will no longer be sent to the CDC.  Instead, it will be sent to the White House.  A little further digging showed that the data will actually go to two private companies both owned by friends of the President. There is a coordinated campaign by the White House to undermine the credibility of Dr. Anthony Fauci as his statements regarding COVID19 are “undermining the President’s message.” The White House views this pandemic as a PR battle, not as a battle against a pathogen that is killing Americans and threatening to overwhelm our healthcare system to the point where it may very well collapse completely from both the number of cases and the attrition of healthcare workers from the virus.

I could provide example after example of the dysfunction in our political leadership and in our citizens in failing to deal with this pandemic. What is clear is that the American response to COVID19 has been a failure by any objective standard one wishes to use. The end result is that we must resign ourselves to the deaths of hundreds of thousands of Americans, the crippling of thousands who are lucky to survive a bout with the virus, and the damage to the economy that has yet to be fully grasped. We may very well feel the effects of this for generations.

The response by the foreign press and my friends who live outside of the United States is quite sobering.  The most common sentiment I see is pity and confusion.  How could the United States, the world leader in science, be crippled by this virus? How much needless suffering is being imposed on Americans?  Why does the United States refuse to follow the practices of all the other countries that have beaten this virus and now report zero cases at their hospitals for days and, in some cases, for weeks? There are attempts by many political pundits to understand why this has happened but there is one fact that they all agree on: The United States was wide open to both the introduction and spread of this virus.  It has neither the infrastructure nor the will to fight this virus. The infrastructure has been dismantled by the Trump administration and various media outlets have convinced a significant number of Americans that science is only one opinion among many. The eyes of our friends and allies are filled with tears as they watch us suffer through this.

There are other eyes watching the goings-on here that are not filled with tears. They are watching intently at our catastrophic failure to deal with a pathogen that has a five to ten percent mortality rate at best. They see the rest of the world walling us off; a US passport is essentially useless at this point.  These eyes are also in possession of military-grade pathogens that have been engineered to be incredibly effective at killing their hosts. We are talking about mortality rates of 50% or better. At this point, it is even questionable if we could identify the pathogen before it killed millions of Americans.   Were we to uncover intelligence that something like this was about to happen, our intelligence communities would not be believed by a significant number of Americans and politicians. Our once great laboratories have been shut down and defunded and hundreds of scientists who specialized in the field of pathogens have been given their walking papers. The scientific capability to identify and fight something like this is gone. Our pathetic response to COVID19 shows every bad actor in the world we are completely defenseless against a concerted biological attack against this country.

We live in a culture that has become detached from reality.  We have people here in America that believe the earth is flat and is only six thousand years old.  Some of these people hold positions of immense political power.  The Vice President comes to mind as does the Secretary of State. They have deluded themselves to the point where they have left this country completely defenseless. Let us hope that none of the existential threats that are out there decide to take advantage of this situation we find ourselves in.